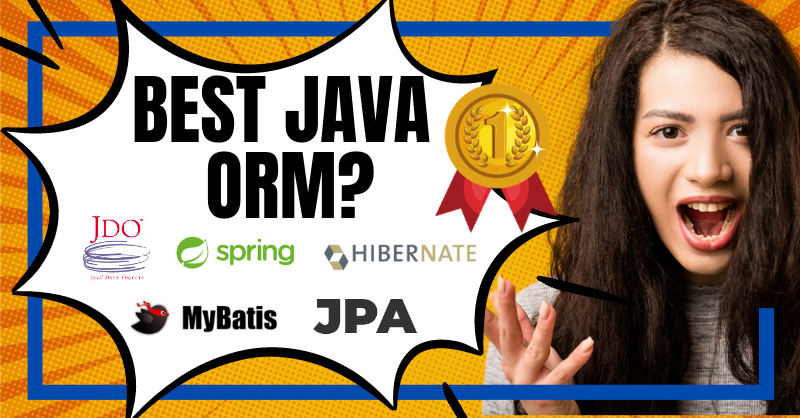 ORM stands for "Object-Relational Mapping." It is a technique that allows a software program to access and manipulate data stored in a database management system (DBMS) using objects. Some popular JAVA ORM frameworks include:

Choosing the right ORM for you depends on the programming language being used and the specific needs of the project.

How to know if you should use ORM framework, or Native SQL (aka SQL) in your code?

The choice between using an object-relational mapping (ORM) framework and native SQL will depend on the specific needs of your project and the preferences of your development team. Here are some pros and cons of each approach:

Pros of using an ORM framework

Most ORM frameworks are open-source projects. Most of them are licensed under the GNU Lesser General Public License (LGPL), which is a free software license that allows developers to use, modify, and distribute Hibernate without charge. The source code for different frameworks are available on GitHub, and developers are welcome to contribute to the project.

Many companies and organizations contribute to open-source object-relational mapping (ORM) frameworks. Here are a few examples:

JPA, is a specification for an ORM framework that is defined by the Java Community Process (JCP), and not an open source project.

Here are some key differences between Hibernate and JPA:

Here are some key differences between Spring Data JPA and JPA:

JDO (Java Data Objects) and JPA (Java Persistence API) are both Java APIs for accessing databases and persisting objects in a Java application. However, there are some key differences between the two:

Hibernate is an open-source object-relational mapping (ORM) framework for the Java programming language. It is licensed under the GNU Lesser General Public License (LGPL), which is a free software license that allows developers to use, modify, and distribute Hibernate without charge. The source code for Hibernate is available on GitHub, and developers are welcome to contribute to the project.

Here are some pros and cons of using Hibernate:

Companies and projects that use Hibernate

Additional companies that use Hibernate:

Hibernate alternatives for Java based developers

Methods to speed up slow Hibernate based applications

There are several ways to improve the performance of a Hibernate-based application:

Until recently, implementing a data access layer of an application was quite difficult. There is too much boilerplate code involved in executing simple queries, performing pagination, and auditing. Using Spring Data JPA, you can significantly simplify the implementation of data access layers by reducing the amount of effort required. Spring will automatically implement your repository interfaces, including custom finder methods, as you write them.

MyBatis is an open-source object-relational mapping (ORM) tool that is used to persist objects in a Java application to a database.
With MyBatis, you can create custom SQL queries, stored procedures, and advanced mappings. Almost all JDBC code is eliminated with MyBatis as well as manual parameter settings and results retrieval. For configuration, MyBatis uses XML or annotations, and maps primitives, Map interfaces, and Java POJOs (Plain Old Java Objects) to database records.
MyBatis is a good choice if you need a lightweight and simple data access layer and you are comfortable writing SQL queries manually. It may not be the best choice if you need a more fully featured ORM tool with support for advanced features.

Companies and projects that use MyBatis

Methods to speed up slow MyBatis based applications

There are several ways you can try to speed up a slow MyBatis application:

JDBC (Java Database Connectivity) is a Java API for accessing databases. It provides a set of Java classes and interfaces for establishing a connection to a database, executing queries and updates, and processing the results. JDBC is a low-level API that allows developers to write code that interacts directly with a database using SQL.

One key difference between JDBC and Java ORM is that JDBC is a lower-level API that requires developers to write more code to interact with the database, while ORM tools provide a higher-level abstraction that can simplify the development process. ORM tools can also improve the performance and scalability of an application, as they handle tasks such as connection pooling and caching automatically. However, ORM tools can also introduce additional complexity and can have a performance overhead, as they generate and execute SQL statements dynamically.

Today, Hibernate is the most popular Java ORM, but as we said above, all ORM frameworks have pros and cons, and many companies choose instead to use Native SQL with JDBC.

When choosing an ORM tool, it is important to consider the specific needs of your project, including the type of database you are using, the complexity of your data model, and the level of performance and scalability you need. It is also a good idea to consider the resources available to your project, such as the experience of your team and the amount of time and effort you are willing to spend on integrating and maintaining the ORM tool.