Hi together I know that issue has been discussed for several times, but we face an insane weird issue on our new SQL Server 2014 SP3 right now, and we just can't get behind.

Any how, we have some queries which are handled extremly bad. All leads to the fact that the SQl Server Optimizer creates an execution plan, thinks its okay but on execution it does an inner join (or multiples) with Millions instead of expected 1-2 rows. And of cours millions of logical reads. And I can't get behind whats ongoing in this. These statements ran minutes then.

So basically, we have already 3 databases. All same version and hardware, Prod Test and Dev Environment. My tests can be done pretty easily. All dbs are configured the same and show the same behaviour, but on different queries. Lets say somethimes the test environment does the same statement multipletimes in 47s, the prod db in just a second. Others take seconds in Prod, are instand in Test. What the heck is going on? I always retry the statements muliple times to ensure its cached.

The query is generated by the 4 Tier Application we are using.

1s vs 47s. Both of these DBs share the same SQL Instance. The weird thing is that it might be instant as well if we reset the plan cache. But any how, it slows down again by a complete mess of misscalculation in the optimizer.

Any ideas what could have been wrong here? How to correct single execution plans? How can it be that the sql server doenst learn from that extremly bad statement and to correct it the next time it runs?

I have switched over and rebooted the Test DB with standard trace flags, so no compatibility mode. 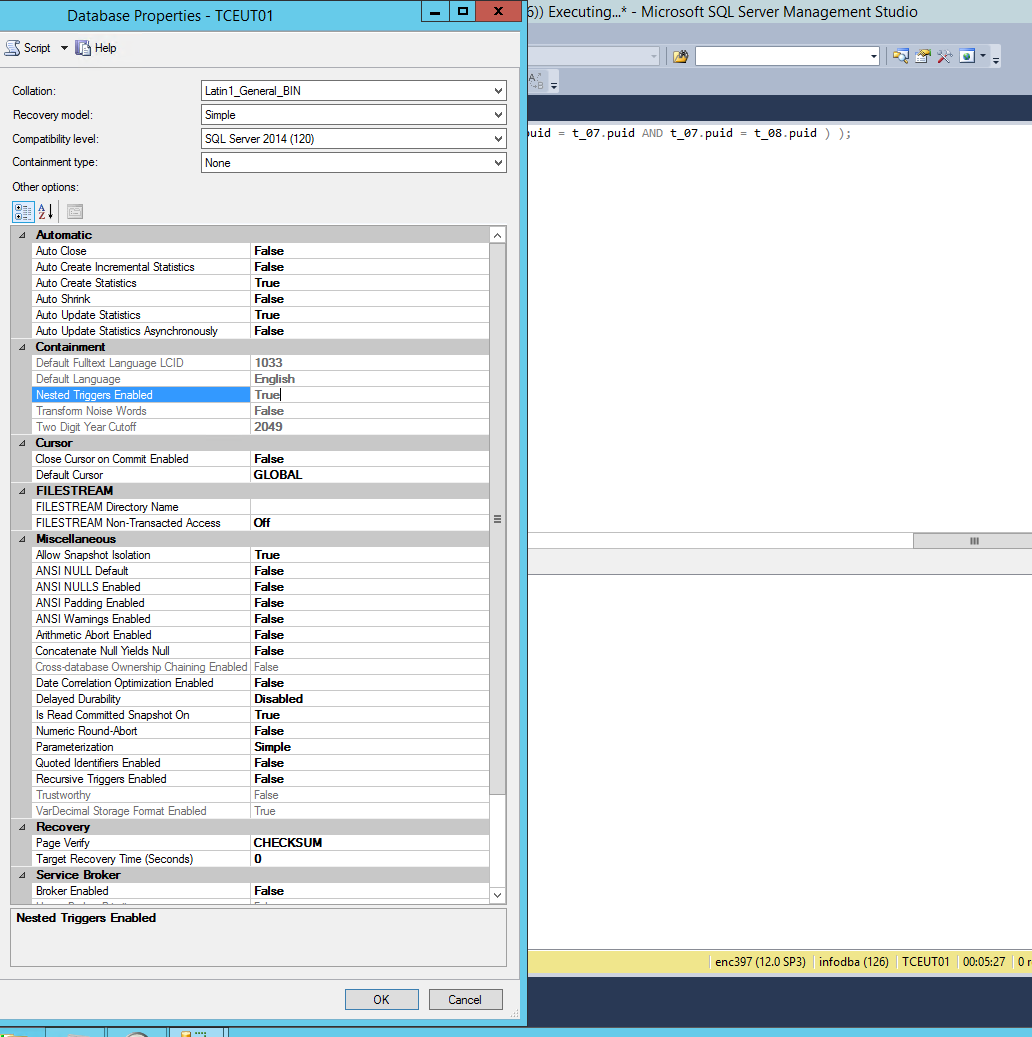 What could it be if the first queries against the DB are lightening fast in the beginning and at later on it slows down by factor 50 as it does a weird execution plan?

This whole topic, including the test with the older CE in "test", came up due to the fact that if we create a single most likely required index in our production environment, a bad execution plan is created, similar to the bad one above, causing 100% cpu load within three minutes and we had to kill all sessions 3 times during working time now, even as a MS SQL expert created that index in good mood.

The missing index statement was this:

We need to try the same with a complete DB restart on weekend as we cant see that weird plan in our test environment having this Index enabled. Statistics are a good point, I'll verify if they were all updated. Any ideas on this?

Sadly we dont seem to have a solution yet. What we inestigated the last weeks:

-> we found out that some date / time colums were not migrated correctly from oracle, they had no hour and minutes time stamps so all have been on date and 0:00. The in general high load on our production environment dropped fixing the affected tables. I expect the queries got far less data to compute once the dates have been more atomic.

-> we were pretty optimistic that the highly suggested Index creation, who caused out prod db to stuck, now will be created without any issue on less than 10% Db CPU load.

-> we created it yesterday after working hours so less load on the DB. Within minutes we sould see some active CTE statements having billion, seriously billions of logical reads and they did not shift to resent at all. It seems that it have been always the 4 same process IDs but as said, they crank up some cores to 100% and keep running. We did not do a flush of the whole execution plan cache as we saw the plans they use are new.

-> I could only grab of the active statements and save their execution plan. sadly this should be the expected, not the real execution plan or?

The new index was named: EN_PIPRELEASESTATUS_1

So any how, this Index causes our prod Db to stuck in hefty plans, while the identical test environment runs fine.

Btw: We could drop the indey by

I took a screenshot of some sessions going crazy, that was on the very beginning